What do women want? Better ask the Spice Girls.

The Margaret Horn Big Conversation happened last week on Social Enterprise Day. We brought together a panel of great women who each brought their own take on the question at the heart of The Great Women’s Trade Off: Helping Women Succeed at Work. (Luckily, none of us wanted to become a woman bishop or we would have been stymied from the start.) 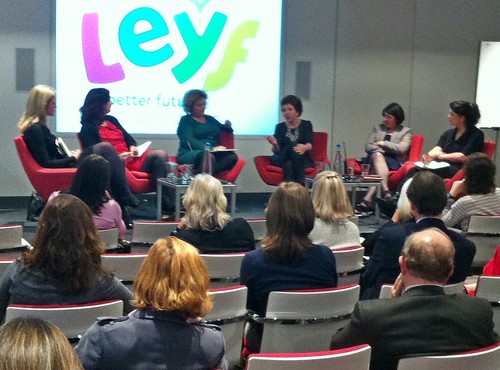 Interestingly Maria Miller, Minister for Women and Equalities, had announced only the day before that we needed to be more competitive, and not stifle the achievement and ambition of 50% of the population. She rejected quotas for Board Rooms, but set out the Think, Act and Report initiative to get businesses to promote gender equality in the workplace. She then blotted her copybook by announcing a £2m scheme to boost childcare by giving those wanting to set up a nursery access to £500 grant to cover set up costs! Clearly, she has not spoken to any of us in the sector who would have explained the real costs of setting up a childcare business.

The panel was chaired by the inimitable Associate Editor of the Sunday Times, Eleanor Mills, a woman unafraid to speak her mind.

Emma Stewart from Timewise focused on the issue of part time and flexible working. This week she and her partner Karen Mattison announced the inaugural Power Part Time Top 50 women (88%) and men who are proof that it’s possible to have very senior posts and work part time. It caught the eye of the press, as it is a good way of keeping women in the workplace while remaining cost effective for businesses. The aim is to have more women break the habit of long hours at the top by showing smart working is the way ahead, and in doing so then make it possible for women lower down the ranks to work part time too.

Naturally enough I covered childcare; a subject for which we are damned if we do and damned if we don’t! I will talk about this at length in future blog posts. Meanwhile Alice Weighman, a very elegant woman who runs Hanson Search, talked about her research among communication and marketing companies aiming to find out what they could do to help retain their best female staff who leave to have children.

Kate Bamford, a partner at Ernst and Young, was described by some of the audience as the woman to break the ‘EY mould’. She was certainly very positive and gave off a really agreeable vibe. She talked about mentoring and sponsorship – I only wish I had been mentored by someone like her twenty years ago, maybe then I would have ended up leading a FTSE 500 company wearing really smart clothes and Loboutins.

Our final panel member was Baroness Tina Stowell, the Government’s spokesman in the House of Lords for Women & Equalities as well as for Work & Pensions. She is a Government Whip for the Home Office and the Department for Culture, Media and Sport, as well as the Conservative Party’s Deputy Chief Whip in the House of Lords. A very busy lady, but one still willing to give up an evening to support other women.

The evening raised many issues, from ambition to expectation, to changing work practices for all women and men. It challenged the narrowness of the work-life balance concept which could in itself be a strait-jacket. We also looked to the needs of ordinary women doing ordinary jobs with little power or influence in their workplace. Like any big subject, the discussion was wide-ranging, as it should be – after all we are trying to consider half the population aged from 18 to 70!

At the end of the evening Neil Fenton, LEYF Director of Finance & Social Enterprise (and one of the few men in the audience), bravely asked the question: “Well what do you women want?” I laughed at the idea there could be a simple, single answer. It reminded me of the chick flick PS I Love You, when that rather gorgeous Irish actor Gerard Butler asked Hilary Swank to share the sacred secret of what women want. She whispered in his ear… we do not know.

I’ll tell you what I want, what I really really want,

Whether you were able to attend the event or not, if you have something you’d like to add to this timeless debate, let me know in the comments section below.