According to Downing St, isolation and loneliness are more dangerous to our health than smoking.  Well as the saying goes, tell me about it! But why do we need Downing St to tell us this?  We have been saying this forever. It’s one of the main reasons why at LEYF we have a multi-generational approach to how we work.
One of my many habits (the number increases with age) is listening to Desert Island Discs.  It’s a great place to hear what people think about their lives.  I was very touched by a woman who talked about her loneliness since being widowed.  She said:

I have plenty of things to do with people but I have no one to do nothing with.”

It’s an expression used this week by Esther Rantzen who is setting up a helpline called the Silver Line for older people to share worries, get advice and maybe get linked into local services. I am not sure about the name though, sounds more like a bus network to me.

Still, it was the horror of loneliness that made me so passionate about doing things from a multi-generational perspective. Just take a moment to look out the window and it does not take long to pick up the loneliness vibe.  We are not helping either by introducing those awful self-service check out machines at supermarkets. Apart from the fact that they don’t seem to work most of the time, some people have no interaction with another human being for days on end – so imagine when they finally get to the supermarket, only to find they have to talk to the woman from the Sat Nav school of communication. No thank you.  It’s another nail in the loneliness coffin: no bus conductors, few officials to chat to, limited local police officers on the street and so eventually barely a soul it seems to even pass the time of day. Humans are social.  We need to be social to survive. 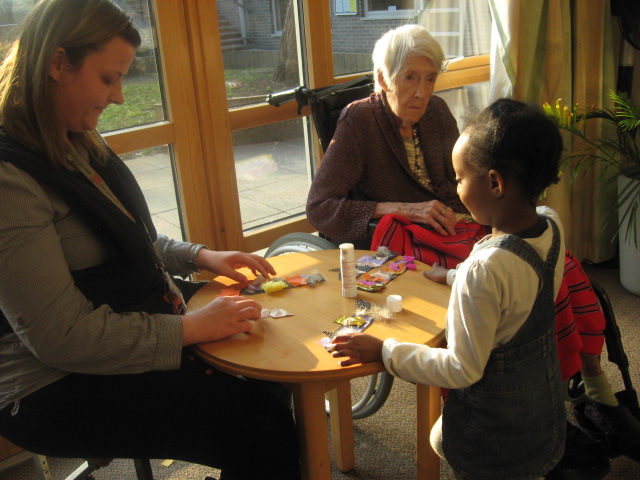 Staff at LEYF have responded remarkably well to our multi-generational way of doing things.  For instance, last week saw Julie Weiss and her nursery team at Luton Street begin a series of six weekly activity sessions with older people (above), spending time together to make things with the children. Some people may think this all a tad trivial, but I remember how Jo Lax (our manager at Holcroft) found herself shocked and rather distressed at the end of one Pancake Day she had hosted for older people in her nursery’s community, as an elderly lady came and said

Thank you. This keeps me wanting to stay alive, otherwise I wouldn’t bother.”

But we know that isolation is not just about being old; again why we have a multi-generational approach.  We are always meeting people who have moved to London, only to find themselves isolated and not knowing what to do.  That’s why we are starting a TimeBank.  We have lonely Dads, especially those who are no longer working, at home with their children and not sure how to engage with other parents.  Dad’s sessions like those run by Marion at Carlton Hill are as much about this as giving Dads a safe space to play with their children.

Some of our apprentices, barely 17 years old, come to LEYF feeling isolated and very alone in a crowd. It takes the skill of the tutor to engage with them and help them become part of a friendship network.

Our Children Centres have to be multi-generational, as we have to find ways to help people make friends and get to know one another; so many mothers are lonely, especially those who have come from abroad, either with their high flying husbands or as economic migrants.

Loneliness is the scariest thing out there. We can’t build a better future for London’s children if we don’t at least try to create ways of reducing loneliness.  And we can’t afford to fail, lest it also become our own inevitable fate.

I must remind every reader of this blog that children, staff and the occasional parent from our Carlton Hill Community Nursery will soon have their 15 minutes of fame on Channel 4, as part of the three part series ‘Daddy Daycare‘. So make sure you set your Sky+ or Freeview recorders for 8pm. Starting this Wednesday, February 15, Carlton Hill will feature on episode #2 (Feb 22), so please do tune in – and let us know what you think in the usual channels!

Final mention this week must go to one of currently two male nursery managers at LEYF, David Stevens at the Angel, who is using findings from our own action research to present for a second time at BECERA. In fact, he’s not the only member of LEYF staff (male or female) presenting this year. So thanks and congratulations to you all – simply fantastic stuff!