I read with a sinking feeling, an article in the Telegraph March 2011 entitled “Parents who shun fairytales miss chance to teach children morality“.  In essence, they were quoting a report (based on a new book by Sally Goddard Blythe) that found modern parents were no longer reading fairy stories and nursery rhymes to their children because they were too violent or full of negative stereotypes.
I was not surprised about nursery rhymes, since we have noticed that many of our parents don’t know the old classic rhymes, and so we have been trying to readdress this with story sacks and song boxes.  Still, their ignorance was not a response to violence or negative stereotyping, rather they had simply not learned them at their own mother’s knee.

I was deeply disappointed about the state of fairy stories – books that are a must in any nursery box.  Fearful, that maybe this view had permeated our own organisation – or staff had been on a course which dictated an end to reading fairy stories – I randomly rang our nurseries and spoke with whoever answered the phone.  To my great relief, the response was a resounding “of course fairy stories and nursery rhymes are read and enjoyed at LEYF”.  In fact, I was reassured that…

…fairy stories are a popular choice by all children, who like them because they have a straightforward story structure, lots of repetition, fun, excitement and morality very clearly outlined in black and white.”

According to Jean Hudson, Manager of our Queensborough Community Nursery (one of our three officially Outstanding settings), they also “bring romance into children’s lives.”

On the subject of violence, Judy at Luton Street suggested there is more violence in the DVDs many children watch, often alone on TVs in their bedrooms, than stories read in the cosy confines of the nursery – cuddled-up next to friends, repeated often and with excitement by an enthusiastic storyteller, led by a supportive and familiar staff member.  I was equally glad to discover they were all using the original, unexpurgated versions rather than the often more popular and saccharine Disney ones.

On the way out of Head Office, I ran into a group of staff and children from Bessborough on their way back from a trip to a local park, and asked them the same question.  A similar reply, but also a reminder that fairy stories have a great deal of material for drama – something children use a lot, as a successful means of extending and stretching their imagination.  A salutary parting comment was that parents do their children a disservice by wrapping them in cotton wool: in the end children have to learn that life is not always fair and happy; and so children should not be protected from this but helped to manage it.

So fairy stories are alive and well at LEYF and are enjoyed day to day by the 1700 children we support every year.  They remain a crucial element of our curriculum, and continue to be a good way of supporting language development, learning about right and wrong whilst extending the imagination.

Elsewhere, real world romance was well and truly alive at the wedding of Mansukh’s son, where the boy got his girl and they agreed to live together happily ever after.  A key member of our Head Office Finance Department (with me below), Mansukh (or Mr Shah as he is known to everyone) invited me and the rest of the team to celebrate his proud moment, as he watched his eldest son, an accountant, marry a very pretty school teacher.  Looking every part the Indian Maharajah, we counted on Mansukh’s good humour, as we moved among a sea of colourful saris playing a game of spot the accountant; using all the popular stereotypes, we tried to count how many people were in Finance.  Tunde (below, right) won! 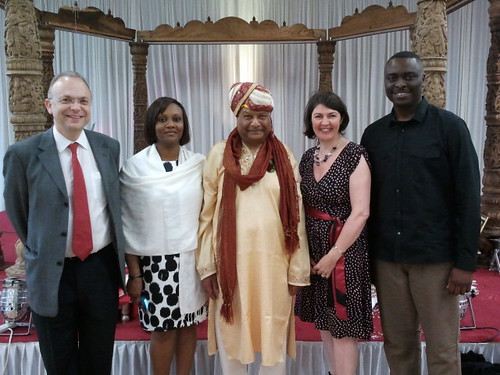