This week has been rather a fest of networking, the most noteworthy of which was one evening and one day attending the Conservative Party Conference.   A Conference virgin, I was unprepared for the sheer intensity of the networking, posturing and positioning among the very male audience. It put me in mind of a quote by Armstrong Williams that ‘Networking is an essential part of building wealth’.

The conference audience was seduced by the charisma of Boris Johnson and Michael Gove,  lapping up their passionate espousals of their pet topics, London and Education.  I was surprised their boyish charm won over such a male audience, but no one would argue (in that hall) against the call to arms to save children and the nation from poverty. Michael Gove spoke eloquently for 40 minutes without notes, praising and celebrating the importance of good schools, successful academies and the development of free schools.  I dropped a note to him afterwards asking that he now replicate the same power and passion in support of Early Years, making sure we mitigate the risk of disadvantage by celebrating great nurseries and committed staff whilst stopping the drain of very small children into schools.

The conference format included panels of real people introduced by ministers or members of their teams which were designed to marry pragmatism with policy.  They were well received, especially young people explaining how they overcame the consequences of previous government policies.  The only thing missing from the panel was social enterprise; maybe next year! Although I do have to wonder how many of us will still be left clinging to the cliff edge of this recession this time next year.  According to Allison Ogden Newton of Social Enterprise London, social enterprises are currently trying to scale the north face of business, which makes them heroic. Christopher Reeve, the original Superman, said a hero is an ordinary individual who finds the strength to persevere and endure in spite of overwhelming obstacles. The Tory Conference seemed to applaud this principle, so let’s hope that a few of us in the world of social enterprise will win out for another year and be there ready to present to all conferences.

On Thursday, we enjoyed an visit from the deputy Prime Minister, Nick Clegg and the Secretary of Sate for Work and Pensions, Iain Duncan Smith where they officially launched changes to the rules. One of our trustees texted me to say we were beginning to collect ministers like Top Trumps.  What I had learned at the conference is that meeting them was of no use unless you could get their ear and interest. 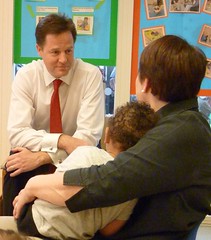 I was therefore pleased to be able to knobble Mr Clegg and suggest that his Social Mobility policy might need a push to get it more visible.  When it was launched Mr Clegg talked about fairness and the means everyone having the chance to do well, irrespective of their beginnings. He said that

Fairness means that no one is held back by the circumstances of their birth. Fairness demands that what counts is not the school you went to or the jobs your parents did, but your ability and your ambition.”

I suggested that he consider how childcare and Children Centres can be strongly woven into this ambition for fairness and extend the principle of early intervention.

I also used my fast developing networking skills to persuade Iain Duncan Smith to consider our Step into Learning programme, which helps us prepare NEETS for the world of work as part of our growing LEYF apprenticeship offer. He eagerly promised to come back and talk some more.

I finished a long and arduous week judging the Nursery of the Year for the NMT awards. It was quite a positive experience since the five finalists I met – chosen randomly from across England – were passionate, engaged and genuinely keen to give children and parents the best childcare experience possible. This was contrasted by a rather depressing article in the Evening Standard (7th Oct, Girl is forced to stay at nursery as all primary schools are full).

Ironically, staying in nursery until you are rising six is how we should be operating, not pushing children into school at four and thinking it’s OK; oh how the battle to save children from too early schooling is no nearer to winning. In the meantime, children in Finland happily play at nursery until they are six – and then leave school as the most successful young people in Europe, ready and more capable to take on the world. It seems to me that it’s a wise society indeed that truly values and invests in its nurseries.