As we rush to the end of a very speedy 2012, I thought I would review the year through the lenses of my 42 blogs. From RiRi to the Spice Girls and Bedouin Tents to Scottish Islands, it’s clear that LEYF has had an eventful year.
Back in January 2012, we started the year with interest rate rises, higher unemployment, problems in the Eurozone, freakish weather and the promise of deflation. Quite frankly, we needed neither Nostradamus nor the I Ching for predictions on how to navigate the year, as such things seem to be regular occurrences nowadays – and all evidence indicates that 2013 will begin along very similar lines. These realities have meant a year of keeping our noses at LEYF just above the waterline, with a great deal of pressure on the front line in our nurseries to keep occupancy up and debt down. Not the easiest task, even with the stalwart support of our Central Office team. Consequently, the debate about child poverty remained live throughout the year and featured in my blog at least six times. Just to remind you, my I Ching reading for LEYF for 2012 said:

Work on what has been spoiled;

It furthers one to cross the great water,

Afterwards there is order

Not so far from the truth then as we consider progressions and challenges over the past 12 months!

Earlier in the year we began preparing for the Olympics and, like any good organisation, we had a plan. Luckily, we never had to use it. Instead, like James Bond we whisked across London on foot, bus and ‘Boris Bike’  – and in the case of our Facilities Manager April running, as we brought our own special light (in the shape of our very own Olympic-style torch) to every LEYF nursery, and in so doing created a piece of art that exceeds anything the Turner Prize has ever honoured. 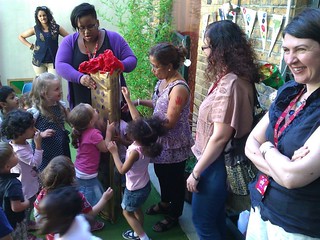 The issue of feminism was raised early this year with the celebration of Little Women’s Christmas in January. While we focused on parents continually throughout the year, we also examined the role of mothers who got bashed for wanting to work. Our annual Margaret Horn Lecture was given over entirely to examining how we can help women excel in the workplace. The criticism against mothers felt like a re-run of the 1970s, prompting this working mother to resurrect my old Spare Rib and Virago books. Ah, such nostalgic memories for the days of ‘Reclaiming the Night’ marches in London.

Humanising capitalism was also a key theme of the year. Occupy London made its rather biblical mark on the steps of St Paul’s cathedral in direct response to the moral failing of banks, as they thrived to the benefit of overpaid staff and the detriment of the poor. Social Enterprise featured in the media as a palatable version for transforming the way we operate. We were proud therefore to be the first social and childcare business to win the ‘Transformational Change’ category of the National Business Awards; a sign of things to come perhaps? Much will depend on the growing availability of social finance and the jury is still out on that.

Leadership was a subject of debate as Boris retained the crown of London’s Mayor and Bob Diamond lost his sparkle. For a while we were able to think more publicly about the importance of good, wise and steady leadership. Sadly, with the phone hacking scandal, the Leveson Report and poor leadership at the BBC unmasked, we saw and heard a lot about unsustainable leadership and not enough about how to lead with integrity, honesty and as a true custodian of the nation’s interests. Radio 4’s Women’s Hour seems to be trying to re-balance this with a bid to name the 100 most influential women leaders. I just hope they think outside the box and not rely on the same old… (Question Time comes to mind!)

Meanwhile, there were changes in Early Years – such as the new Early Years Foundation Stage (EYFS), a fresh Ofsted regime and the change of Government Minister. Other things remained unchanged however, particularly the issue of how to make childcare affordable. This unfortunately remains unanswered and unanswerable, unless we strip down the effective management of funds and its reallocation against societal objectives of what we want for our children.

My blog will always feature things we do and try-to-do at LEYF. Some areas of note have included developing the notion of cultural capital, particularly with regards to language, art, music and food. Just last week, the Ofsted report said that children from deprived homes were still not achieving a level playing field with their more advantaged peers. It also indicated the gap could be as wide as 19 months by the time they get to school. It’s a shocking statistic and one that everyone at LEYF feels we can positively affect. Hence our growth strategy, with the aim of replicating what has been dubbed ‘the LEYF sum’; where a child spends a minimum of 15 hours a week for 36 months in a high quality LEYF nursery, with additional support for parents to help develop a good home learning environment. It was the theme of our heart-warming Staff Conference where we were joined by six Scottish colleagues and Paul Brannigan, lead actor of the Angel’s Share – a film that summed up the plight of so many young people who had a poor start in life. It’s certainly one for the Christmas present list.

So as this year draws to a close, our nursery children, parents and staff are all enjoying festive concerts, parties and family events to mark the Christmas season. As part of this, our nurseries are visiting local care homes to allow the children in our care to bring songs of good cheer to their older neighbours. It truly gladdens my heart, as loneliness, isolation and the separation of the generations are the biggest failing of our modern society. 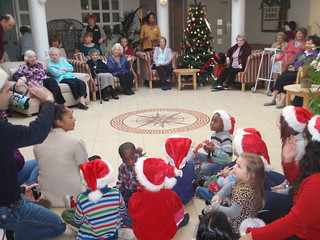 Next year maybe the importance of childcare will be on everyone’s lips. Amidst scenes of the Christmas nativity and the expectation of the birth of a Royal baby in the New Year, our future as a nation may yet take on a golden glow. I wonder, will the three wise men include Mr Gove, our Secretary of State for Education, bringing with him gifts of frankincense, gold and myrrh – or better still, funds and positive policy? Will our star rise in the sky and shine a light on what we do? We will have to wait and see. In the meantime, I best be quick if I’m to write that letter to Santa…

Merry Christmas to you all and a Happy New Year!