The Duchess, the Detective and the Rollercoaster …

I love a sense of connection and see the role of nurseries as being critical in helping to connect communities across the generations.

This week the history of connection came very much alive when we were visited by HRH The Duchess of Cornwall, as she came to formally open the newly refurbished Bessborough Centre, of which our nursery has always been the heart. The royal connection was through the Queen Mother, who originally opened Bessborough nursery in 1937. She was also patron of London Early Years Foundation (first known as Westminster Health Society, then Westminster Children’s Society before becoming LEYF in 2009) until her death.

The Duchess was charming, relaxed and had no airs and graces. I insisted on as many photos as possible for parents and staff, so we could make new connections and write a new story connecting the children and staff to a piece of local history.

On Friday, we enjoyed our annual Staff Conference, this year entitled Building a Better Future: Making Every Experience Count. Held at the new Pimlico Academy, a stunning building full of space, light and glass, it played host to our first invited guest, Detective Chief Superintendent John Carnochan from the Scottish Violence Reduction Unit. A charming and eloquent speaker, he told us the story of David who, born to a mother with alcohol dependency, ended up arrested for murder aged 15 years. The theme of his talk to our staff was Early Intervention – and his 30 minutes could have easily extended to half a day! His argument that Early Intervention is critical was powerful and passionate, as he reminded us how we all have a huge responsibility to make every experience count. His reference to relationships, nurture, brain development, parent engagement and communication picked up on all the key themes of the day, later reflected in the fantastic selection of workshops available to all 320 LEYF staff. He certainly got my vote when he said that nurseries needed to be multi-generational if they are to engage some of the people that might have helped David avoid ending up in prison.

We had invited Michael Gove MP, the Secretary of State for Education to address the conference – and right up to the end we were unsure if he would make it! He did however turn up, having been forced to cut short his half-term holiday with his children once already for a vote in the Commons. Another eloquent speaker, Mr Gove was polished and professional in his delivery. There were bits that were neutral enough to fit any audience, but he did specifically pick up on the importance of a qualified Early Years workforce, announcing the Nutbrown Review to examine the relevance of qualifications for Early Years staff. At one point he started to talk about school readiness (a concept which I worry can be too narrow and pushes little children into school too early), but he redeemed himself by saying there is a broad pedagogical philosophy within the sector, all of which has value once it helps children cope with our ever changing world. 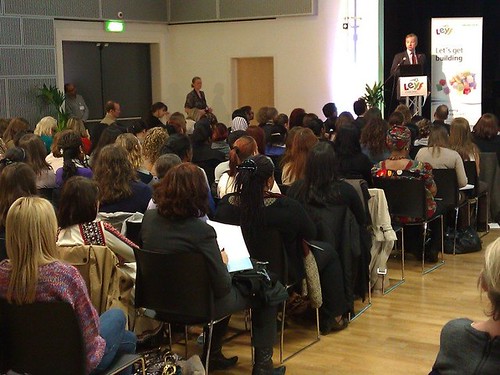 He singled out the LEYF model as one he admired because of the way we ensure social mix and cultural capital, working hard to overcome disadvantage and poor practice, not least through the high ambitions we hold for our children. He concluded his speech with a cry for the kind of creativity found in the Neolithic caves of France his children were visiting that day. He alluded to evidence showing that many of the cave drawings were done by children, but instead of alone, with the guiding hands of adults. He reverted to politician-type when answering the very sensible questions posed by LEYF staff, one of which raised the concern of how we support hard-working, independent and low paid two parent families now squeezed at every level and who make up the highest proportion of LEYF parents. However, overall Mr Gove scored well – as the little clues that escaped all his professionalism to reveal his genuine concern and compassion finally won the day.

Head of HR at LEYF, Neil King is responsible for each year’s conference and always keeps a surprise back for the end of the day. This time we had to build a rollercoaster! Using IKEA type instructions and in groups of six across three long rows, each team was tasked with constructing a section of a cardboard contraption that would enable a basketball to roll down and up and down (with no help…yeah, yeah!) to the end of each row into a cage, where the final force from the speed of the ball would release two helium balloons. It was hysterical, as each group tried to understand how to complete their own individual tasks, let alone join them all together! But the competitive LEYF spirit took over in the end, as everyone took it seriously – especially when certain teams tried to borrow or swop cardboard tubes. Such a great way to end such a lively and rewarding day. 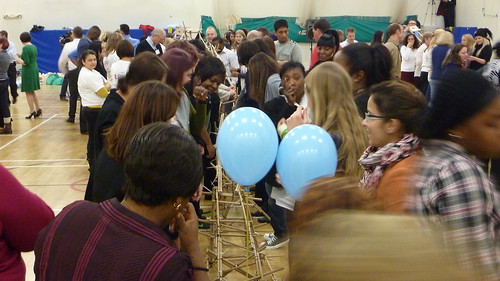 But the week did not end there, oh no! Spending Friday racing back and forth between our Staff Conference and Earls Court, our Marketing & Communications Manager, Neil Hart spent the entire weekend with a rota of enthusiastic LEYF staff (as well as invaluable friends from iNHouse PR and Experiential Play) at the Baby Show. For the first time this year, we were asking the countless new, experienced and to-be parents what they felt were the most important things they could do as parents to build a better future for their own children (as you can imagine many simple, profound and often hilarious ideas were submitted.. more of which once the results are in). 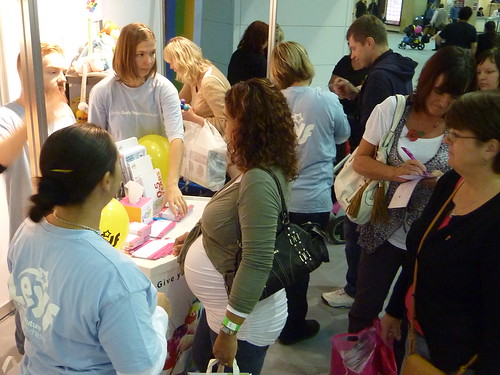 As parents reflected on this weighty question, our staff learned some of their concerns, and so were able to provide advice about going back to work and the right choice of childcare for them and their child. At the same time, we were being given first hand indicators of where there might be a shortage of nurseries. (Ealing and Oxford appeared to be most popular during my stint at the show, so must add these to our expansion plan.)

Meanwhile, everyone was given our brand new ‘LEYF Parent Reward Chart’. The first of its kind ‘in the known universe..’ (so Neil assures me), this simple but ingeniously designed check list aims to encourage and support parents in spending more time actually doing things with their children. gifatron.com

Elsewhere, wandering around the exhibition, I did have to wonder how on earth I ever gave birth to and reared three children without the range of accoutrements on offer across the myriad of stalls: every shape of cushion, buggy and nappy bag were available (and that’s just for starters). Still, among all the high tech buggies and Cath Kidston-type bags, I noticed that knitted blankets were popular – much to my relief, as finally I had found something that my own children had when they were small!

Finally, I am looking forward to seeing my official début on the Guardian’s Social Enterprise Network (Ed: now published here). For my very first outing, I’m hopeful to see the argument prove sufficiently provocative to merit a retweet or two in cyberspace. Back here on earth, it’s Sunday night and time I stopped working.

More importantly, time for TOWIE and a cup of tea.